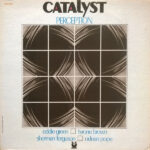 Perception is the second album by the band Catalyst, released in 1973 on Muse.

Catalyst was a funk/jazz quartet from Philadelphia, Pennsylvania, whose material presaged the work of later jazz fusion artists. The group encountered regional success in the 1970s and have become more widely known since the re-release of their material on CD.

5 Got To Be There