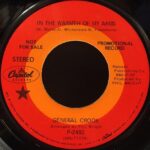 In The Warmth Of My Arms is the debut single by General Crook. It appeared in 1969, followed by “When Love Leaves You Crying” in 1970. Neither sold well, and Capitol soon dropped Crook.

No album, it was released as single only