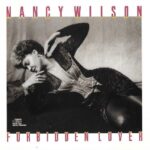 Forbidden Lover is an album by singer Nancy Wilson, released in 1987 on CBS.

Nancy Sue Wilson (February 20, 1937 – December 13, 2018) was an American singer and actress whose career spanned over five decades, from the mid-1950s until her retirement in the early 2010s. She was especially notable for her single “(You Don’t Know) How Glad I Am” and her version of the standard “Guess Who I Saw Today”. Wilson recorded more than 70 albums and won three Grammy Awards for her work. During her performing career, Wilson was labeled a singer of blues, jazz, R&B, pop, and soul; a “consummate actress”; and “the complete entertainer”. The title she preferred, however, was “song stylist”. She received many nicknames including “Sweet Nancy”, “The Baby”, “Fancy Miss Nancy” and “The Girl With the Honey-Coated Voice”

2 I Was Telling Him About You

3 If You Only Knew

7 Too Good To Be True

8 I Never Held Your Heart

9 What Will It Take This Time