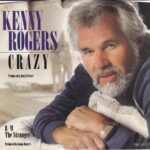 “Crazy” is a song co-written and recorded by American Country music superstar Kenny Rogers. It was released in December 1984 as the second single from his Platinum What About Me? album, following the title song.

This was Rogers’ eleventh number one Country single as a solo artist. The single spent a total of thirteen weeks in the Country chart’s Top 40. It also made the Top Five of Billboard’s Adult Contemporary survey. Rogers co-wrote the track with Richard Marx, who was serving as a session musician and background vocalist for Rogers.

What About Me? is the sixteenth studio album by Kenny Rogers, released by RCA Nashville. The album’s title track, “What About Me?”, is sung in trio with R&B singer James Ingram and Rogers’ former New Christy Minstrels bandmate turned solo star Kim Carnes, which is a love song that reached number one on the AC […]