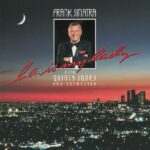 L.A. Is My Lady is the 57th and final solo studio album by Frank Sinatra, released in 1984 and produced by Quincy Jones. While the album was Sinatra’s last (excluding the Duets albums), he recorded five further songs, only four of which have been officially released.

The album came after an album of duets between Sinatra and Lena Horne, instigated by Jones, was abandoned after Horne developed vocal problems and Sinatra, committed to other engagements, couldn’t wait to record. This was the first studio album Sinatra had recorded with Jones since 1964’s It Might as Well Be Swing.

The sessions were filmed, with a small audience, and released as Frank Sinatra: Portrait of an Album (1985). The documentary shows Sinatra meeting Michael Jackson for the first time, with Jones affectionately calling Jackson “Smelly”.

Despite its title, the album was mostly recorded in New York City. The album peaked at #58 on the Billboard 200, and #8 on the Top Jazz Albums chart.

2 The Best Of Everything

3 How Do You Keep The Music Playing

5 It’s All Right With Me

7 Until The Real Thing Comes Along

10 A Hundred Years From Today