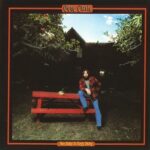 Two Sides To Every Story is a 1977 album by American singer-songwriter Gene Clark. The album was Clark’s first release since his 1974 album No Other. Notable tracks include “In the Pines” (traditional), “Kansas City Southern” and “Hear the Wind”, both written by Clark, and “Give My Love to Marie”, a song written by James Talley that tells the story of a dying coal miner.