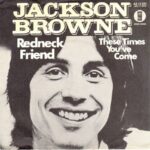 “Redneck Friend” is a song written and performed by American singer-songwriter Jackson Browne, released as the first single from his 1973 album For Everyman, and notable for its double entendre lyrics and guest appearances by Glenn Frey and Elton John, as well as the first appearance of David Lindley on a Jackson Browne single. The song reached number 85 on Billboard’s October 20, 1973, Hot 100 chart, spending 10 weeks on that chart after debuting at number 99 on September 29, 1973. It was also released as a single in France and Japan, and as a promotional single in the United Kingdom and Germany.

For Everyman is the second album by American singer/songwriter Jackson Browne, released in 1973. The album peaked at number 43 on the Billboard 200 chart and the single “Redneck Friend” reached number 85 on the Billboard Hot 100 chart. In 2003, the album was ranked number 457 on Rolling Stone magazine’s list of the 500 […]