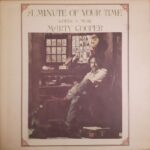 A Minute Of Your Time is an album by Marty Cooper, released in 1972 on Barnaby Records.

Martin James “Marty” Cooper (born March 12, 1946) is an American singer-songwriter whose musical style is described as soft rock country. Cooper has written songs such as “Peanut Butter” by The Marathons, “A Little Bit Country, A Little Bit Rock ‘N Roll” which was first made famous by Donny and Marie, and “Hey, Harmonica Man” made famous by Stevie Wonder. Cooper’s first album, A Minute Of Your Time, was released in 1972. He released his second commercial album in 1979 with EMI and it was only released in Europe. In Germany it was entitled “If You Were A Singer” and “A Little Bit Country, A Bit Rock ‘N Roll” in Scandinavia. In 2012, two albums were released independently, American Dreamers Collection and I Wrote A Song.

Cooper’s first album in 1972, A Minute Of Your Time, was released on Andy Williams’ Barnaby label. Cooper has said about the experience, “Ken Mansfield had done an album with Rick Cunha, my friend from the group Hearts & Flowers. Ken had just gotten his job at Barnaby. I showed him what I was doing and he gave me my opportunity to be a recording artist. He let me pick the songs and we produced the album together.” Due to the commercial success and airplay from A Minute Of Your Time, Cooper was contacted by ad agencies to write, sing and produce music for TV and radio commercials. Clients during that time included Olympia Beer, Alhambra Water, and Crystal Water.