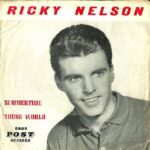 “Summertime” is an aria composed in 1934 by George Gershwin for the 1935 opera Porgy and Bess. The lyrics are by DuBose Heyward, the author of the novel Porgy on which the opera was based, although the song is also co-credited to Ira Gershwin by ASCAP.

It was covered by Rick Nelson in 1962 (Album Seven By Rick) and peaked at #89 in the US Billboard Charts.

Album Seven By Rick (1962) is Rick Nelson‘s seventh studio album and the final comprising new material on Imperial Records. Eric Hilliard Nelson (May 8, 1940 – December 31, 1985), known professionally as Ricky Nelson until his 21st birthday when he officially dropped the “y” and simply became Rick Nelson, was an American singer-songwriter. Tracks […]