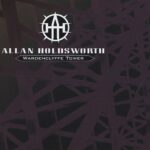 Wardenclyffe Tower is the seventh studio album by guitarist Allan Holdsworth, released in 1992 through Restless Records (United States) and JMS–Cream Records (Europe), and in 1993 through Polydor Records (Japan); a remastered edition was reissued in 2007 through Eidolon Efformation, containing three bonus tracks (alternative versions of “Tokyo Dream” from 1983’s Road Games and “The-Unmerry-Go-Round” from 1985’s Metal Fatigue) which were previously only available on the Japanese release.

The album’s title is a reference to the real life Wardenclyffe Tower, or Tesla Tower, designed by inventor Nikola Tesla in 1901 and located in Shoreham, New York. “Zarabeth” is named after a character in the Star Trek episode “All Our Yesterdays”.