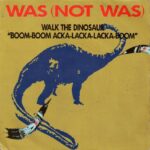 The song features a tight, funky sound, punctuated by horns and a cowbell. When released in the UK in 1987, the song reached No. 10 on the singles chart, becoming the group’s first UK top 10 hit. The music video featured four scantily clad ‘cavewomen’ dancing to the song while a Flintstones-style TV played clips from Daffy Duck and the Dinosaur. Modern people danced to the song in the “Everybody walk the dinosaur” part. The video received heavy rotation on MTV. The song reached No. 7 on the US chart in 1989, two years after its UK success. The song became the band’s biggest hit single in their home country.

According to an interview with co-writer Randy Jacobs, it “was an infectious sing-along with a Flintstonesque video that probably got played on MTV way too much. But even that seemingly good-time anthem had a dark side. […] The song’s about nuclear Armageddon. It became a dance (anthem) because of the video. They connected it with the girls in the little Pebbles and Bam-Bam outfits. All the sudden it became, like, ‘do the mashed potato’ or ‘the twist.’

What Up, Dog? is a 1988 album by Was (Not Was). It became the US group’s breakthrough album worldwide and was ranked #99 on Rolling Stone magazine’s list of the 100 Best Albums of the 1980s. The cover illustration was credited to Christoph Simon and Karen Kelly. Success of What Up, Dog? was propelled by […]

END_OF_DOCUMENT_TOKEN_TO_BE_REPLACED

David Was
Don Was

Don Was
David Was
Randy Jacobs