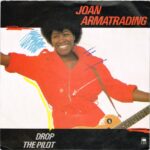 “Drop The Pilot” is a song written and originally performed by Joan Armatrading. It was the first single to be released from Armatrading’s 1983 album The Key, and was her third and (to date) final UK top 40 hit. It reached number 11 in the UK Singles Chart, and spent a total of ten weeks in the Top 40.

The Key is the eighth studio album by the British singer-songwriter Joan Armatrading, released on 28 February 1983 by A&M Records. The album was recorded at Townhouse Studios in Shepherd’s Bush, London; Polar Studios in Stockholm and also in New York. The album spawned the single “Drop The Pilot”, which became one of Armatrading’s biggest […]