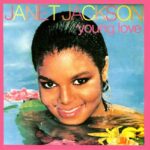 “Young Love” is a song by American recording artist Janet Jackson from her self-titled debut album (1982). It was written and produced by René Moore, Angela Winbush, with additional production by Bobby Watson. It was released as Jackson’s debut single on July 7, 1982 by A&M Records. Prior to her rise to fame, the singer had no interest in pursuing a musical career. Despite this, she was motivated to pursue a career in entertainment, and considered the idea after recording herself in the studio. After acting in the variety show The Jacksons, she began starring in several TV series and commenced recording her debut album. The single sold 200,000 copies in the United States.

“Young Love” received generally positive reviews from music critics, who highlighted it as a standout song from Janet Jackson and praised its catchiness. It peaked at number 64 on the Billboard Hot 100, and was a success on the R&B chart, additionally peaking at number 16 in New Zealand. In order to promote her album, she performed the song on Soul Train and American Bandstand. In recent years, she has included the song on her 2008 Rock Witchu Tour and her performance at the 2010 Essence Music Festival.

Janet Jackson is the debut studio album by American singer-songwriter Janet Jackson, released on September 21, 1982 by A&M Records. Janet Jackson is described as a dance and contemporary R&B record. Songwriters Angela Winbush and René Moore contributed to much of the album’s lyrics. Moore and Winbush share production credits with Foster Sylvers, Jerry Weaver, […]