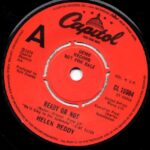 “Ready Or Not” is the third and last single from Helen Reddy‘s album We’ll Sing In The Sunshine. It was the the only single from that album that hit the US Billboard Chart and peaked at #73.

We’ll Sing in the Sunshine is the tenth studio album by Australian-American pop singer Helen Reddy that was released in 1978 by Capitol Records. The album included two songs that were also covered by Johnny Mathis in the first half of that year: “All I Ever Need”, which came out on his March release, You […]