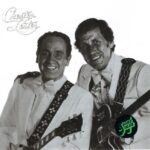 Chester & Lester is a collaborative album by guitarists Chet Atkins and Les Paul released in 1976.

It was recorded in the mid-1970s when Atkins was in his fifties and Paul in his sixties. Atkins coaxed Paul out of his decade-long retirement for this recording. The liner notes state there is very little overdubbing and the majority of the album was live in the studio.