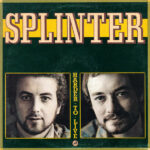 Harder To Live is the second album by Splinter, released in 1975.

In preparing for this album, Harder to Live, George Harrison arranged for them to record at A&M Studios in Los Angeles during the late spring and early summer of 1975. The band were unable to use the studio time, however, due to Purvis suffering from hay fever, apparently brought on by the LA smog. Since Harrison was in town working with fellow Dark Horse acts such as Keltner’s band Attitudes, he instead used the pre-booked studio time to record his own album, Extra Texture. This would be Harrisons last Apple album.