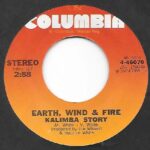 “Kalimba Story” is a song by R&B band Earth, Wind & Fire released as a single in 1974 on Columbia Records. Kalimba Story was produced by Maurice White and Joe Wissert and composed by Maurice and Verdine White. The song also came off EWF’s 1974 album Open Our Eyes.

Open Our Eyes is the fifth studio album by American band Earth, Wind & Fire, released on March 25, 1974 on Columbia Records. The album rose to No. 1 on the Billboard Top Soul Albums chart and No. 15 on the Top Pop Albums chart. Open Our Eyes has been certified Platinum in the US […]