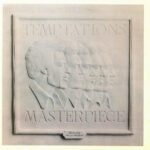 Masterpiece is a 1973 album by The Temptations for the Gordy (Motown) label, produced and written by Norman Whitfield.

The title refers to the album being not the group’s intended masterpiece, but Norman Whitfield’s. Having already produced songs for the Temptations such as “Smiling Faces Sometimes” and “Papa Was a Rollin’ Stone” which emphasized his instrumental tracks over the group’s vocals, Whitfield goes one step further here.

The title track, at nearly 14 minutes long, includes only three minutes of vocals from the group, who all share sections of the lead vocal. “Masterpiece” shares space on side one with “Hey Girl (I Like Your Style)”, a slow classic-styled ballad led by Richard Street which opens the album. Side two of the LP opens with “Ma”, an ode to a hillbilly mother led by Street, Damon Harris, and Melvin Franklin, which was recorded as the title track of Rare Earth’s 1973 Whitfield-produced LP. “Law of the Land”, led by Dennis Edwards, Street, and Harris, was recorded the same year by The Undisputed Truth. The song is a message track in the tradition of “Don’t Let the Joneses Get You Down” from Puzzle People. “Plastic Man”, with its lead vocal shared between Edwards, Harris, Franklin and Street, disparages “plastic people” who operate in backhanded ways, while the eight-minute album closer, “Hurry Tomorrow”, is a solo spot for Harris, which explores a hallucinogenic drug trip.