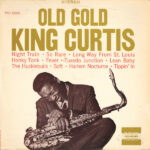 Old Gold is the eighth solo album by King Curtis, released in 1961.

Curtis Ousley (born Curtis Montgomery; February 7, 1934 – August 13, 1971) known professionally as King Curtis, was an American saxophonist who played rhythm and blues, jazz, and rock and roll. A bandleader, band member, and session musician, he was also a musical director and record producer. Adept at tenor, alto, and soprano saxophone, he played riffs and solos on hit singles such as “Respect” by Aretha Franklin (1965), and “Yakety Yak” by The Coasters (1958) and his own “Memphis Soul Stew” (1967).