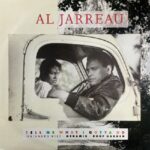 “Tell Me What I Gotta Do” is a single from Al Jarreau‘s album L Is For Lover. It was released in 1987 and reached #98 in the UK Charts.

L Is for Lover is a studio album by Al Jarreau, released in September 1986 on Warner Bros. Records. It reached #30 on the Billboard Top Soul Albums chart, #9 on the Traditional Jazz Albums chart, and #17 on the Contemporary Jazz Albums chart. Nile Rodgers, the album’s producer, called it “the best thing I […]