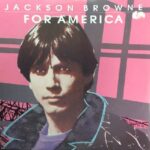 “For America” is a song written and performed by American singer-songwriter Jackson Browne from his 1986 album Lives in the Balance. Released as the first single from the album, it reached No. 30 on the Billboard Hot 100 chart, spending 12 weeks on that chart after debuting at No. 72, and peaked at No. 3 on the Mainstream Rock chart, making it his last top 40 hit in the United States. It was also released as a single in the United Kingdom, as an EP in Germany, and as a promotional issue in Spain and Japan. A Statue of Liberty-shaped vinyl picture disc single was also released by Asylum in 1986, manufactured in the United Kingdom.

Lives in the Balance is the eighth album by American singer/songwriter Jackson Browne, released in 1986 (see 1986 in music). It reached number 23 on The Billboard 200 chart. The title track as well as “For America” and “In the Shape of a Heart” were released as singles. The album was ranked number 88 on […]