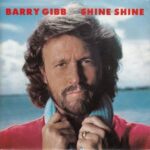 “Shine, Shine” is a song recorded and released by Barry Gibb. The first single from his debut solo album Now Voyager, it proved to be another hit single for Gibb, as he had previously released the US Top 10 singles “Guilty” and “What Kind of Fool,” on both of which he had collaborated with Barbra Streisand. “Shine, Shine,” however, was his first entirely solo hit single.

The selection was written and composed by Gibb, his brother Maurice, and George Bitzer. The song has a fast percussion beat and a relatively straight melody line. Though the date, in 1984, of its recording in Middle Ear Studios was undocumented as of late April 2015, it employed string arrangements which were added later in Ocean Way Studios, Los Angeles. Gibb also sings background and harmony vocals and played acoustic guitar on this track.

Now Voyager is the second solo album to be recorded by Barry Gibb, although it was his first to be released. Gibb had recorded an entire album in 1970 called The Kid’s No Good, which never received official release. The album contains his biggest hits “Shine, Shine” and “Fine Line”. The album also included the […]

END_OF_DOCUMENT_TOKEN_TO_BE_REPLACED

Musicans in the tags above are confirmed. For more information click on album above.