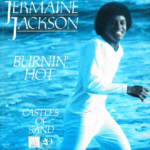 Burnin’ Hot is the third single by Jermaine Jackson from his album Let’s Get Serious. It was released in 1980 and peaked at #32 in the UK Charts.

Let’s Get Serious is the sixth studio album by Jermaine Jackson, released in 1980. It reached #6 on the Billboard album chart and logged five weeks at #1 on the Top R&B chart. It achieved sales of 900,000 copies in the United States. The title track was 1980’s biggest Soul hit of the year and […]