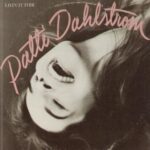 Livin’ It Thru is the fourth and last album by Patti Dahlstrom, released in 1976 on 20th Century.

Patti Dahlstrom is a singer, songwriter, and teacher. She recorded four albums in the 1970s and co-wrote the Helen Reddy hit “Emotion”. Dahlstrom stopped recording music in the 1970s, citing exhaustion as the reason. Years later in an interview, Russ Regan said he was surprised that her albums hadn’t been more popular. During the 1980s, she continued to write songs and learn photography. Returning to Texas in 1990, she taught songwriting at the Art Institute in Houston and became director of the department. In 2008 she moved to London to pursue a master’s degree in writing. Three years later she moved to San José del Cabo, Mexico. A compilation of her music from the 1970s was released in 2010.