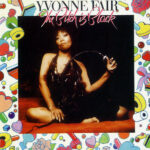 The Bitch Is Black is an album by Yvonne Fair, released in 1975 on Motown.

Flora Yvonne Fair Strain (October 21, 1942 – March 6, 1994), known professionally as Yvonne Fair, was an American singer, best known for her 1975 recording of “It Should Have Been Me”. Fair had a small part as a singer in the Motown produced film Lady Sings the Blues (1972).While on Motown, she was the opening act for the Temptations, the Jackson 5, Marvin Gaye, and Stevie Wonder. Fair worked with producer Norman Whitfield on a series of singles: “Love Ain’t No Toy”, “Walk Out the Door If You Wanna”, and her cover version of “Funky Music Sho’ ‘Nuff Turns Me On”. All these featured on her only album in 1975 titled The Bitch Is Black, which was re-released on CD for the first time more than 30 years later.