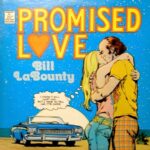 Promised Love is the first album by singer/songwriter Bill LaBounty, released in 1975 on Warner/Curb.

Bill LaBounty is an American musician. He was initially a singer-songwriter in the soft rock genre, first as a member of the band Fat Chance, and later as a solo artist. As a solo artist, LaBounty recorded six studio albums, including four on Curb Records/Warner Bros. Records. His first charting single, “This Night Won’t Last Forever”, was covered in 1979 by Michael Johnson, whose rendition was a Top 20 pop hit that year, and eventually also covered by the country group Sawyer Brown in the early 2000’s.