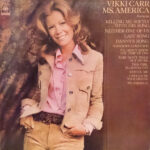 Florencia Bisenta de Casillas-Martinez Cardona (born July 19, 1941), known by her stage name Vikki Carr, is an American vocalist. She has a singing career that spans more than four decades. Born in El Paso, Texas to parents of Mexican ancestry, she has performed in a variety of musical genres, including pop, jazz and country, while her greatest success has come from singing in Spanish. She established the Vikki Carr Scholarship Foundation in 1971. Vikki Carr has won three Grammys and was honored with a Lifetime Achievement Award at the Latin Grammys in 2008 at the 9th Annual Latin Grammy Awards.