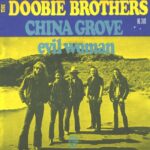 “China Grove” is a song on The Doobie Brothers‘ 1973 album The Captain and Me. It was written and sung by original main singer/songwriter Tom Johnston. The song reached number 15 on the Billboard Hot 100. While there is a real China Grove, Texas, Johnston’s lyrics about the community are fictional. The song spent eight weeks in the Top 40.

In 2010, examination of the master recording tape for the track by recording engineer Chris Baseford revealed that, similar to most bands of the time, the band played together while tracking in the studio instead of overdubbing the instrumental elements; some guitar amp sound could be heard leaking into the drum tracks and some drum tracks leaking into the guitar track.

The production on the song was described as “pretty standard”. Aside from the drums, panned slightly off center, there were some additional percussion, tambourine, and handclap overdubs. Baseford described the bass performance and sound on this song as “top notch” with Tiran Porter playing the melodic line using a pick and plugging directly into the mixing board. Like many songs by Johnston, the music was composed and developed before the lyrics were written. It started with a guitar riff that he and drummer John Hartman developed into a jam with a chord structure. Johnston said that the lyrics were influenced by a piano part in the performance. According to Johnston, “…I really owe Bill Payne for the words because he played this wacky bridge that started the thinking process with this wacky sheriff, samurai swords, and all that.”

The Captain And Me is the third studio album by American rock band The Doobie Brothers. The album was released on March 2, 1973, by Warner Bros. Records. It features some of their most popular hits including “Long Train Runnin’”, “China Grove” and “Without You”. The album is certified 2× Platinum by the RIAA. There […]

END_OF_DOCUMENT_TOKEN_TO_BE_REPLACED

Musicans in the tags above are confirmed. For more information click on album above.