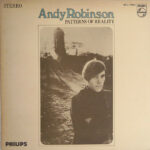 Patterns Of Reality is an album by Andy Robinson, released in 1968 on Phillips.