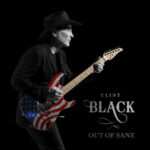 Out Of Sane is an album by Clint Black, released in 2020.

Clint Patrick Black (born February 4, 1962) is an American country music singer, songwriter, musician, multi-instrumentalist, record producer, and actor. Signed to RCA Nashville in 1989, Black’s debut album Killin’ Time produced four straight number one singles on the US Billboard Hot Country Singles & Tracks charts. Although his momentum gradually slowed throughout the 1990s, Black consistently charted hit songs into the 2000s. He has had more than 30 singles on the US Billboard country charts, twenty-two of which have reached number one, in addition to having released twelve studio albums and several compilation albums. In 2003, Black founded his own record label, Equity Music Group. Black has also ventured into acting, having made appearances in a 1993 episode of the TV series Wings and in the 1994 film Maverick, as well as a starring role in 1998’s Still Holding On: The Legend of Cadillac Jack.

3 American (Still In Love With You)

1995 Dirk K – Beach Ball 1977 Mike Mainieri – Love Play
Manage Cookie Consent
To provide the best experiences, we use technologies like cookies to store and/or access device information. Consenting to these technologies will allow us to process data such as browsing behavior or unique IDs on this site. Not consenting or withdrawing consent, may adversely affect certain features and functions.
Manage options Manage services Manage vendors Read more about these purposes
View preferences
{title} {title} {title}