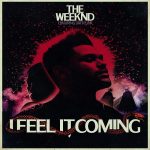 “I Feel It Coming” is a song by Canadian singer The Weeknd featuring French electronic duo Daft Punk, from his third studio album, Starboy (2016). It was written by the trio alongside Doc McKinney, Cirkut and Eric Chedeville, being produced by Daft Punk, with the Weeknd, McKinney and Cirkut serving as co-producers. The song was released for digital download on November 18, 2016, alongside “Party Monster”, as promotional singles. It was first sent to British contemporary hit radio on November 24, 2016, and it was released to US rhythmic contemporary radio on December 6, 2016 through XO and Republic Records, serving as the album’s second single, following their previous collaboration “Starboy”. It was named Song of the Year at the 2018 BMI R&B/Hip Hop Awards

Starboy is the third studio album by Canadian singer The Weeknd. It was released on November 25, 2016, through XO and distributed by Republic Records. The album features guest appearances from Daft Punk, Lana Del Rey, Kendrick Lamar, and Future. It was supported by seven singles: “Starboy”, “I Feel It Coming”, “Party Monster”, “Reminder”, “Rockin’”, […]