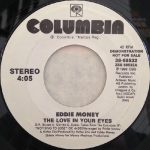 “Love In Your Eyes” is a song by American rock singer Eddie Money, from his album Nothing to Lose in 1988. It was released as a single and reached number 24 on the Billboard Hot 100 and number one on the Billboard Album Rock Tracks chart. The song was written by Adrian Gurvitz, David Paul Bryant, and Steve Dubin.

Nothing To Lose is the seventh studio album by American rock musician Eddie Money. The album was released on October 4, 1988, by Columbia Records. The top-ten hit “Walk on Water” featured a guest appearance from original band member Jimmy Lyon on lead guitar.     Tracks 1  Walk On Water (Jesse Harms) 04:12 2  […]