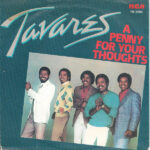 “A Penny For Your Thoughts” is a song by R&B/disco group Tavares in 1982, originally recorded by Marion Jarvis in 1975. It was written by Kenny Nolan. Released from their 1982 album New Directions, the song became Tavares’s eighth and final US Top 40 hit, peaking at number 33 on the US Billboard Hot 100 singles chart and number 28 on the Cash Box Top 100. Unlike all of their bigger hits, “A Penny for Your Thoughts” did not chart in Canada. Three collections of the group’s work were issued during the early 2000s by Capitol Records, however, because of their label change to RCA the song was not included among their other hits.
The B-side of the 45, “The Skin You’re In”, was also written by Nolan. “A Penny for Your Thoughts” was his ninth of 10 compositions to become U.S. chart hits. Ten years later Atlantic Starr would reach the Top 10 with Nolan’s song, “Masterpiece.”

New Directions is the eleventh album by American soul/R&B group Tavares, released in 1982. It is the group’s first album for RCA following their departure from Capitol. Lead single “A Penny for Your Thoughts” peaked at #16 on the R&B chart and #33 on the Billboard Hot 100, the group’s highest placing on that chart […]