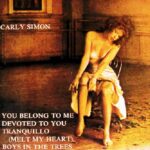 “You Belong To Me” is a song written by American singer-songwriters Carly Simon and Michael McDonald. Originally recorded by McDonald’s rock group The Doobie Brothers for their seventh studio album, Livin’ on the Fault Line (1977). A live version of the song from The Doobie Brothers’ 1983 album Farewell Tour would later chart on the Pop Singles chart at number 79 in August 1983.

The song was made famous by Simon herself when she recorded it for her seventh studio album, Boys in the Trees (1978). Released as the album’s lead single, her version reached the top ten of the Billboard Pop Singles chart, peaking at number 6, and remained on the chart for 18 weeks.  Simon received a Grammy Award nomination for Best Female Pop Vocal Performance in 1979. Simon’s version has been featured on the soundtracks to the romantic comedy films Desperately Seeking Susan (1985) and Little Black Book (2004), as well as being featured on many compilation albums of her work.

Boys In The Trees is the seventh studio album by American singer-songwriter Carly Simon, released in 1978. The album included “You Belong to Me”, which reached No. 6 on the Billboard Pop Singles chart and became Simon’s fifth Top 10 pop hit. Another track, a remake of The Everly Brothers’ 1958 hit “Devoted to You”, […]