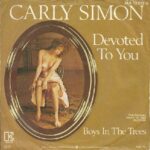 “Devoted To You” is a song written by Boudleaux Bryant. The best-known recording was by The Everly Brothers, released by Cadence Records as catalog number 1350. This version was issued as the flip side of “Bird Dog,” but reached the charts on its own, at No. 10 on the United States pop charts, No. 25 in Australia, and No. 1 in Canada. In addition, the song reached No. 7 on the United States country music chart and No. 2 on the rhythm and blues chart.

The song was also recorded by American singer-songwriters Carly Simon and James Taylor, appearing on Simon’s 1978 album, Boys in the Trees. Following the smash success of the album’s first single “You Belong to Me”, Devoted to You was released as the second single, and it also became a Top 40 hit. Charting on both the Billboard Pop singles chart and Billboard Adult Contemporary chart, as well as the Hot Country Songs chart. The song also charted in Canada, peaking at No. 50.

Boys In The Trees is the seventh studio album by American singer-songwriter Carly Simon, released in 1978. The album included “You Belong to Me”, which reached No. 6 on the Billboard Pop Singles chart and became Simon’s fifth Top 10 pop hit. Another track, a remake of The Everly Brothers’ 1958 hit “Devoted to You”, […]