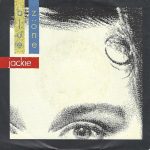 “Jackie” is a song written by Billy Steinberg and Tom Kelly for the 1987 film, Summer School. It was originally recorded by Elisa Fiorillo and included on the Summer School soundtrack. In 1988, “Jackie” was recorded by Lisa Stansfield’s band, Blue Zone for their 1988 album, Big Thing. It was released as a single and peaked at #54 on the US Billboard Hot 100 and #37 on the Hot Dance Club Songs. In 1998, “Jackie” was recorded by Joanne, who used samples from the Blue Zone version. It was issued as B.Z. featuring Joanne and reached number three in Australia and number five in New Zealand. Another cover by Redzone peaked at number thirty-seven in Australia.