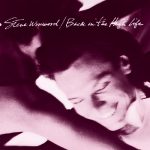 Back In The High Life is the fourth solo album by English singer, songwriter, and multi-instrumentalist Steve Winwood, released on 30 June 1986. The album proved to be Winwood’s biggest success to that date, certified Gold in the UK and 3× Platinum in the US, and it reached the top twenty in most Western countries. It collected three Grammy Awards and generated five hit singles, starting with “Higher Love” which became Winwood’s first Billboard Hot 100 number-one chart topper, coming 20 years after he first entered that chart with “Keep on Running” by the Spencer Davis Group. Other global hit singles from the album were “Freedom Overspill”, “Back in the High Life Again” and “The Finer Things”. The single “Split Decision”, with ex-Eagles guitarist Joe Walsh, was a US hit.

Musically, the album was polished and sophisticated, representative of pop production in the 1980s, featuring Winwood’s style of layered synthesizers and electronic drums that he had established with Arc of a Diver (1980). Unlike his prior two albums, on which he played every instrument himself, Winwood made extensive use of session musicians for this album, including Joe Walsh and Nile Rogers on guitars and JR Robinson on drums. Winwood himself also performed on a large number of instruments, combining live-played instruments with synthesizers and programming. Prominent backing vocals were provided by established stars, including Chaka Khan on “Higher Love”, James Ingram on “Finer Things”, and James Taylor on the title track. The album showcased Winwood’s lifelong fascination with the fusion of styles, bringing folk, gospel and Caribbean sounds into a rock, pop and R&B milieu. As with his previous albums, Back in the High Life served as an uplifting alternative to the angry or political punk that was sweeping the rock world.

The album was recorded and released during a time of significant change in Winwood’s personal life. After touring North America to promote the album during August–November 1986, Winwood divorced in England and then married in New York City. He bought a second home in Nashville where he organized his next project, Chronicles, a retrospective album of earlier songs including some remixes engineered by Tom Lord-Alge, whom Winwood had befriended in the making of Back in the High Life.

2 Take It As It Comes

4 Back In The High Life Again

6 Wake Me Up On Judgment Day