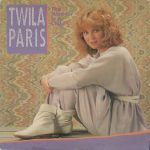 The Warrior Is A Child is the fourth album by Twila Paris, released in 1984.

Twila Paris is a contemporary Christian music singer, songwriter, author and pianist. Since 1980, Paris has released 22 albums, amassed 33 number one Christian Radio singles, and was named the Gospel Music Association Female Vocalist of the Year three years in a row. Many of her earlier songs such as “He Is Exalted”, “We Will Glorify”, “Lamb of God”, and “We Bow Down”, are found in church hymnals or otherwise sung in church settings.