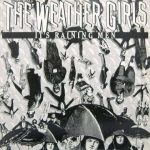 “It’s Raining Men” is a song by the American musical duo The Weather Girls from their third studio album Success (1983). It was released as the album’s lead single on September 10, 1982 through Columbia Records and CBS Records International. Paul Jabara wrote the song in collaboration with Paul Shaffer, and produced the song in collaboration with Bob Esty. “It’s Raining Men” is a Hi-NRG and post-disco that incorporates elements of R&B, soul, and 1970s-style electronic dance music. Its lyrics describe an excitement and enjoyment of many different types of men.