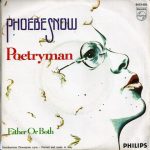 “Poetry Man” is a song by the American singer-songwriter Phoebe Snow. The song was written by Snow, produced by Dino Airali, and first appeared on her 1974 self-titled debut album.

Released as a single in late 1974, “Poetry Man” became Snow’s first charting hit, rising to number five on the Billboard Hot 100 chart in April 1975 and number four in the Canadian RPM Magazine charts. The previous month, the song reached number one on the Billboard easy listening (adult contemporary) chart, where it remained for one week. The success of “Poetry Man” helped Snow achieve a Grammy nomination for Best New Artist in 1975, an award that was won that year by composer Marvin Hamlisch.

Retrospectively, Snow stated that the production of the song’s record was more jazz-oriented than the eclectic, acoustic guitar-based music she often performed throughout her career, saying that she “never intended to be a jazz artist. That takes a heavy amount of background.” The saxophone part on the recording is played by Zoot Sims.

On American Top 40 in September 1980, Casey Kasem claimed that Phoebe Snow said that the song is about Jackson Browne. This was later dispelled by Snow as a rumor that had arisen only because Browne was the first musician she had toured with after release of the song.

Phoebe Snow is the debut album by singer-songwriter Phoebe Snow, released in 1974. It contains her Top 5 Billboard pop hit, “Poetry Man”. Sessions were held in Los Angeles, Nashville and in Tulsa to find the right approach for the album. “She’d play with whoever was around and we’d record and analyze the recordings, try […]