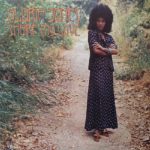 Share My Love is the second studio album by Gloria Jones, released in 1973. Dedicated to the memory of Gloria’s friend, Lee Jacobs. It was received well by critics and the Motown industry, however was not promoted, as Gloria decided instead to work with Marc Bolan and T. Rex.

In a 2002 interview, conducted by James Ellis, Gloria was quoted: “I had just finished recording an album called Share My Love for Motown and the manager called me and said he wanted to book me into the Continental in LA, where Bette Midler had just broken. I got a call from Marc and he said: ‘I need you to come and help me finish an album in Germany.’ I made the decision to go with him. I sent my management a telegram from Germany saying: ‘Sorry, I’m in love.’ ”

Share My Love was given its first official CD release in March 2009.

9 What Did I Do To Lose You