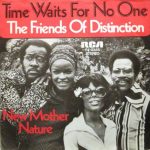 “Time Waits for No One” is a song written by Neil Sedaka and Howard Greenfield, and originally recorded by Sedaka in 1970.

Whatever is the fourth studio album by R&B group The Friends Of Distinction, released in 1970 on the RCA Victor label. The album peaked at No. 42 on the R&B albums chart. It also reached No. 179 on the Billboard 200. The album features the single, “Time Waits for No One”, which peaked at No. […]