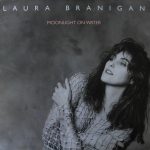 “Moonlight On Water”, also known as “Moonlight on Water (Sex on the Beach)”, is a popular song written and composed by Steve Kipner, best known for writing Olivia Newton-John’s “Physical”, and Andy Goldmark. The song was originally recorded by Kevin Raleigh for his 1989 album Delusions of Grandeur and was released as a single. It reached #60 on the U.S. Billboard Hot 100 singles chart on 24 June 1989.

The song was covered by Laura Branigan and was the first single taken from the self-titled album that she released in 1990. However, it was only a minor hit in the United States (reaching #59, one spot higher than Kevin Raleigh’s version), where a sexy music video for the song received little airplay. Branigan can be seen performing the song on her second videocassette and laserdisc concert release, Laura Branigan in Concert, which was filmed in 1990 at a tour stop in Atlantic City and initially televised as part of the syndicated TV series SRO: In Concert.

Laura Branigan is the sixth album by singer Laura Branigan, released in 1990. The album’s second single, “Never in a Million Years”, was an AC hit for Branigan. The album also brought the singer back to the tops of the Hi-NRG charts and dancefloors with its first single, “Moonlight on Water”, and a trendy update […]