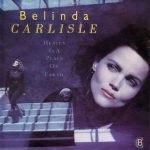 “Heaven Is A Place On Earth” is a song by American singer Belinda Carlisle from her second studio album, Heaven on Earth (1987). Written by Rick Nowels and Ellen Shipley, the song was released as the lead single from the Heaven on Earth album on September 14, 1987, and it reached number one on the US Billboard Hot 100 on December 5, 1987, becoming Carlisle’s only US chart-topper to date. A month later it peaked at number one in the United Kingdom, where it held the top spot of the UK Singles Chart for two weeks.

The song was nominated for the Grammy Award for Best Female Pop Vocal Performance in 1988, but lost out to Whitney Houston’s “I Wanna Dance with Somebody (Who Loves Me)”. In 2017, ShortList’s Dave Fawbert listed the song as containing “one of the greatest key changes in music history”.

Heaven on Earth is the second solo album by American singer Belinda Carlisle, and released in 1987. The album features three singles that made the Top 10 charts in the United States, including the #1 hit and Carlisle’s signature song “Heaven Is a Place on Earth”. It is her most successful album to date. Tracks […]