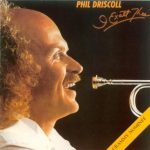 I Exalt Thee is a 1983 album by trumpeter and singer Phil Driscoll. It was released in 1983 on LP by Sparrow Records. The album was released on cassette in 1988. In addition to its regular CD release, in 1998 Driscoll re-performed and re-recorded the album under his own label, adding another track “I Will Bless the Lord”, with the title I Exalt Thee: 1998.

The album includes three original songs by Driscoll, three standards, and three modern tracks from other songwriters. The title track, “I Exalt Thee”, had been written by Pete Sanchez in 1975 and copyrighted in 1976. It was not, however, until Driscoll popularized it with this 1983 eponymous album, that the song and Sanchez gained national and international attention.

The album was the first collaboration between Driscoll and producer, arranger, and songwriter Lari Goss, spawned by a chance encounter at Benson Records. Goss went on to co-produce, arrange, and co-write many of Driscoll’s songs and albums, and performed with him live on a number of occasions.