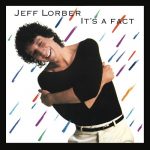 It’s a Fact is the first solo album by jazz musician Jeff Lorber.

6 Your Love Has Got Me