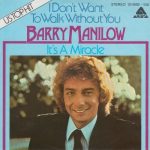 “I Don’t Want To Walk Without You” is a song written by by Jule Styne with the lyrics by Frank Loesser. Composer Irving Berlin was a huge admirer of the song. Berlin reportedly said that of all the songs by other composers he had heard, he would have been most proud to have written “I Don’t Want To Walk Without You”. Writing of Berlin’s praise for the song, Loesser wrote in his diary, “Irving Berlin came in today and spent a solid hour telling me that ‘Walk’ is the best song he ever heard. He played and sang it over, bar by bar, explaining why it’s the best song he ever heard. I was flattered like crazy.” A review in the trade publication Billboard called the composition “one of those natural songs with a down-to-earth story that boy sings to girl and vice versa, with a matching melody that makes it contagious on the first listen”.

One Voice is the sixth studio album by singer/songwriter Barry Manilow, released in 1979. It was recorded at United Western Studios and Allen Zentz Recording in Hollywood. The album was a signature of a minor decline in Manilow’s success. It reached 2x platinum, not 3x platinum, as his past six albums did. The album only […]