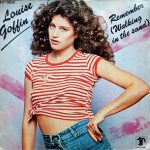 “Remember (Walking In The Sand)”, also known as “Remember”, is a song written by George “Shadow” Morton. It was originally recorded by the girl group The Shangri-Las, who had a top five hit with it in 1964. A remake by Aerosmith in 1979 was a minor hit. There have been many other versions of the song as well. In 1979, Louise Goffin released a remake of the song on her debut album, Kid Blue. That version, charted in the top 50 of the Billboard Hot 100.

Kid Blue is the debut album by singer Louise Goffin, released in 1979 on Elektra/Asylum. Louise Lynn Goffin is a singer/songwriter and multi-instrumentalist and Producer of the Grammy Nominated Album “A Holiday Carole”. Signed by record executive Lenny Waronker to Dreamworks in 1999, Louise released her critically acclaimed CD Sometimes a Circle on Dreamworks in […]