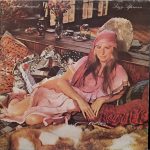 Lazy Afternoon is the seventeenth studio album recorded by American singer Barbra Streisand. It was released on October 14, 1975 by Columbia Records. Following a mixed critical response to her previous studio album, ButterFly (1974), the singer began working with new musicians for the project. Recorded in April 1975 in Los Angeles, Lazy Afternoon contains pop standards. Producer Rupert Holmes wrote three songs on the album, and co-wrote a fourth, “By the Way”, with Streisand. She also included a few cover songs, such as Four Tops’ “Shake Me, Wake Me (When It’s Over)”, Stevie Wonder’s “You and I”, and Libby Holman’s “Moanin’ Low”.

The album received generally favorable reviews from music critics who agreed that it was more exciting than ButterFly. Commercially, the album peaked at number 12 on the United States, number 42 in Canada, and number 84 in Australia. It was later certified gold by the Recording Industry Association of America for shipments of 500,000 copies. “My Father’s Song” and “Shake Me, Wake Me (When It’s Over)” were released as singles in August and November 1975, respectively. The former entered the Adult Contemporary charts in the United States and Canada while the latter was a success on two of Billboard’s dance charts in late 1975.