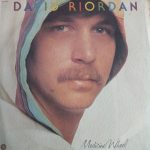 Medicine Wheel is an album by David Riordan, released in 1974 on Capitol Records.

David Riordan is an interactive media executive, producer and designer, a documentary television producer and a professional songwriter. He co-wrote the number-one hit “Green-Eyed Lady” for the band Sugarloaf in 1970, and released his first solo album in 1974 called Medicine Wheel. In the early 1980s, while working as a consultant for Lucasfilm, producer of the Star Wars franchise, he began his career as an interactive media designer, producer and director that continued until the late 1990s. During that time he directed interactive entertainment groups for Cinemaware, Philips Media, Time Warner and Disney. He later became a producer for television shows that appeared on the A&E network, was the VP of Media at Integral Life and the director of the Ken Wilber Biography Project. Riordan is currently the director of Story Studio TV, a convergence transmedia company.